Kathir ibn Qays said: “I was sitting with Abu al-Darda’ in the mosque of Damascus. A man came to him and said: Abu al-Darda’, I have come to you from the city of Allah’s Messenger for a narration I have heard that you relate from the Prophet (s). I have come for no other purpose.” He said: I heard Allah’s Messenger (s) say:
“If anyone travels on a road in search of knowledge, Allah will cause him to travel on one of the roads of Paradise, the angels will lower their wings from good pleasure with one who seeks knowledge, and the inhabitants of the heavens and the earth and the fish in the depth of the water will ask forgiveness for the learned man. The superiority of the learned man over the ordinary believer is like that of the moon on the night when it is full over the rest of the stars. The learned are the inheritors of the Prophets, and the Prophets have neither dinar nor dirham, leaving only knowledge, and he who takes it takes an abundant
portion.”
Abu Dawud narrated it in his Sunan as the first hadith of the book of `Ilm, also Ibn Majah and Darimi in the muqaddima of their Sunan, all of them with a weak chain which, however, is strengthened by the fact that Bukhari in his Sahih, Tirmidhi in his Sunan, Ahmad in his Musnad, Bayhaqi in his Sunan all narrate various parts of this hadith. 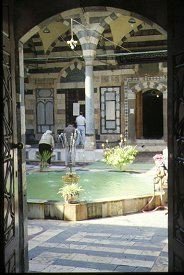