The Miraculous Night Journey and Ascesion to the Highest Heaven and BeyondWhen, while awake, he (Allah bless him and grant him peace) was taken on a night journey, with his spirit (rūĥ) and body, from the Mosque of the Ĥarām (in Makkah) to the Mosque of al-Aqsā (in Jerusalem) and its sacred precinct He was taken up to the heavens.

In the first heaven he saw Ādam, dignity enveloping and exalting him
In the second heaven, he saw ‘Isa ibn al-Batūl (Jesus son of the Virgin Mary, who isolated herself in devotion to Allah), the Good the Pure And his cousin, Yaĥya, who was given wisdom in application of the Torah (and prophethood) in his youth
In the third heaven, he saw Yūsuf, the Şiddīq, with his beautiful form
In the fourth heaven, Idrīs (named for his extensive study of Allah’s book), whom Allah raised to his high place
In the fifth heaven, Hārūn, the beloved of the Israelite nation
In the sixth heaven, Mūsā, to whom Allah talked intimately
And in the seventh heaven, Ibrāhīm, who came to his Lord with a heart at peace and an inwardness of goodness Whom Allah protected from the fire of Nimrod

O Allah, scent his noble grave with an aromatic fragrance of blessings and peace 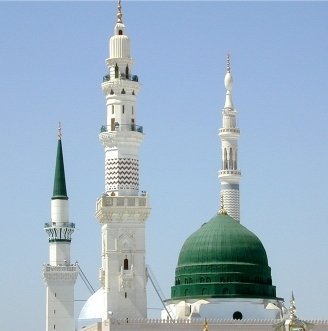