﷽
Al-`Arif biAllah al-Junayd al-Baghdadi (d. 298 H. in Baghdad)
He was al-Junayd b. Muhammad b. al-Junayd al-Nehawandi al-Baghdadi, al-Khazzâr Abul Qasim. Sufi and one of the `ulema, he followed the fiqh of Abu Thawr. He took tasawwuf from his maternal uncle Sari al-Saqati and from al-Harith al-Muhasabi. He was called al-Khazzar because he was working with khazz (silk). He was the head of a large and influential school in Baghdad.

Al-Junayd ibn Muhammad ibn al-Junayd, Abu al-Qasim al-Qawariri al-Khazzaz al-Nahawandi al-Baghdadi al-Shafi`i (d. 298). The Imam of the World in his time, shaykh of the Sufis and “Diadem of the Knowers,” he accompanied his maternal uncle Sari al-Saqati, al-Harith al-Muhasibi, and others.

Abu Sahl al-Su`luki narrates that as a boy al-Junayd heard his uncle being asked about thankfulness, whereupon he said: “It is to not use His favors for the purpose of disobeying Him.”

He took fiqh from Abu Thawr – in whose circle he would give fatwas at twenty years of age – and, it was also said, from Sufyan al-Thawri. He once said: “Allah did not bring out a single science on earth accessible to people except he gave me a share in its knowledge.” He used to go to the market every day, open his shop, and commence praying four hundred rak`as until closing time.
Among his sayings about the Sufi Path: “Whoever does not memorize the Qur’an and write hadith is not fit to be followed in this matter. For our science is controlled by the Book and the Sunna.”
To Ibn Kullab who was asking him about tasawwuf he replied: “Our madhhab is the singling out of the pre-eternal from the contingent, the desertion of human brotherhood and homes, and obliviousness to past and future.” Ibn Kullab said: “This kind of speech cannot be debated.”
His student Abu al-`Abbas ibn Surayj would say, whenever he defeated his adversaries in debate: “This is from the blessing of my sittings with al-Junayd.”

* “Not the profusion of prayer and fasting, but wholeness of the breast and selflessness.”1

* “Tasawwuf means that Allah causes you to die to your self and gives you life in Him.”

* “It means that you be solely with Allah with no attachments.”

* “It is supplication together with inward concentration, ecstasy together with attentive hearing, and action combined with compliance [with the Sunna].”

* “It is the upholding of every high manner and the repudiation of every low one.”

When his uncle asked him to speak from the pulpit he deprecated himself, but then saw the Prophet (s) in his dream ordering him to speak.
Ibn Kullab once asked al-Junayd to dictate for him a comprehensive definition of tawhid he had just heard him say. He replied: “If I were reading from a record I would dictate it to you.”
The Mu`tazili al-Ka`bi said: “My eyes did not see his like. Writers came to hear him for his linguistic mastery, philosophers for the sharpness of his speech, poets for his eloquence, and kalam scholars for the contents of his speech.”
Al-Khuldi said: “We never saw, among our shaykhs, anyone in whom `ilm and hal came together except al-Junayd. If you saw his hal you would think that it took precedence over his `ilm, and if he spoke you would think that his `ilm took precedence over his hal.”

Like the Sunni imams of his generation, al-Junayd hated theological disputations about Allah and His Attributes: “The least [peril] that lies within kalam is the elimination of Allah’s awe from the heart. And when the heart is left devoid of Allah’s awe, it becomes devoid of belief.”

Once a young Christian asked him: “What is the meaning of the Prophet’s hadith: ‘Beware the vision of the believer for he sees with the light of Allah’?”2 Al-Junayd remained immersed in thought then lifted his head and said: “Submit, for the time has come for you to accept Islam.” The young man embraced Islam on the spot.
Al-Junayd defined the Knower (al-`arif) as “He who addresses your secret although you are silent.” Ibn al-Jawzi cites another example of Junayd’s kashf in his Sifa al-Safwa:

Abu `Amr ibn `Alwan relates: I went out one day to the market of al-Ruhba for something I needed. I saw a funeral procession and I followed it in order to pray with the others. I stood among the people until they buried the dead man. My eyes unwittingly fell on a woman who was unveiled. I lingered looking at her. Then I held back and began to beg forgiveness of Allah the Exalted. On my way home an old woman told me: “My master, why is your face all darkened?” I took a mirror and behold! my face had turned dark. I examined my conscience and searched: Where did calamity befall me? I remembered the look I cast. Then I sat alone somewhere, asking Allah’s forgiveness assiduously. I decided to live austerely for forty days. [During that time] the thought came to my heart: “Visit your shaykh al-Junayd.” I travelled to Baghdad. When I reached the room where he lived I knocked at his door and heard him say: “Come in, O Abu `Amr! You sin in al-Ruhba and we ask forgiveness for you here in Baghdad.”3

About the Sufis al-Junayd said:

* “They are the members of a single household that none other than they can enter.”

* “The Sufi is like the earth: every kind of abomination is thrown upon it, but naught but every kind of goodness grows from it.”

* “If you see a Sufi caring for his outer appearance, then know that his inward being is corrupt.”

Ibn Qayyim al-Jawziyya related from al-Sulami that al-Junayd said: “The truthful seeker (al-murid al-sadiq) has no need for the scholars of knowledge” and: “When Allah desires great goodness for the seeker, He makes him flock to the Sufis and prevents him from accompanying those who read books (al-qurra’).”4
This is similar to al-Junayd’s saying reported by al-Dhahabi: “We did not take tasawwuf from what So-and-So said and what So-and-So-said, but from hunger, abandonment of the world, and severance of comforts.”
Al-Junayd also said: “Among the marks of Allah’s wrath against a servant is that He makes him busy with that which is of no concern to him.”5

Ibn al-Qayyim in al-Fawa’id asserts the superiority of the struggle against the ego (jihad al-nafs) over all other struggles and quotes al-Junayd:

Allah said: {Those who have striven for Our sake, We guide them to Our ways} (29:96). He has thereby made guidance dependent on jihad. Therefore, the most perfect of people are those of them who struggle the most for His sake, and the most obligatory of jihads (afrad al-jihad) are the jihad against the ego, the jihad against desires, the jihad against the devil, and the jihad against the lower world. Whoever struggles against these four, Allah will guide them to the ways of His good pleasure which lead to His Paradise, and whoever leaves jihad, then he leaves guidance in proportion to his leaving jihad.
Al-Junayd said: “[The verse means] Those who have striven against their desires and repented for our sake, we shall guide them to the ways of sincerity. And one cannot struggle against his enemy outwardly except he who struggles against these enemies inwardly. Then whoever is given victory over them will be victorious over his enemy. And whoever is defeated by them, his enemy defeats him.”6

Ibn `Abidin related in his fatwa on the permissibility of dhikr gatherings:

The Imam of the Two Groups,7 our master al-Junayd was told: “Certain people indulge in wajd or ecstatic behavior, and sway with their bodies.” He replied: “Leave them to their happiness with Allah. They are the ones whose affections have been smashed by the path and whose breasts have been torn apart by effort, and they are unable to bear it. There is no blame on them if they breathe awhile as a remedy for their intense state. If you tasted what they taste, you would excuse their exuberance.”8

In his Kitab al-Fana’ (“Book of the Annihilation of the Self”) al-Junayd states:

As for the select and the select of the select, who become alien through the strangeness of their conditions – presence for them is loss, and enjoyment of the witnessing is struggle. They have been effaced from every trace and every signification that they find in themselves or that they witness on their own. The Real has subjugated them, effaced them, annihilated them from their own attributes, so that it is the Real that works through them, on them, and for them in everything they experience. It is the Real which confirms such exigencies in and upon them through the form of its completion and perfection.9

Al-Junayd went on pilgrimage on foot thirty times. On his deathbed he recited the Qur’an incessantly. Al-Jariri related that he told him: “O Abu al-Qasim! Put yourself at ease.”
He replied: “O Abu Muhammad! Do you know anyone that is more in need of Qur’an at this time, when my record is being folded up?” He finished one khatma then started over until he recited seventy verses of Sura al-Baqara, then he died. Ibn `Imad al-Hanbali said: “If we were to speak of his merits we could fill volumes.”

Al-Sakhawi cites another narration whereby the Prophet (s) said: “Allah has servants who know (the truth about people) through reading the signs” (tawassum). Narrated from Anas with a fair chain by al-Bazzar in his Musnad, al-Tabarani, and Abu Nu`aym in al-Tibb al-Nabawi as stated by al-`Ajluni in Kashf al-Khafa’.

9Translation communicated to the author by Michael Sells, Haverford College.

Blessings and peace on the Prophet, his Family, and his Companions 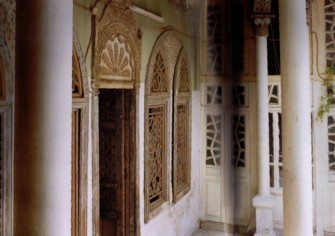